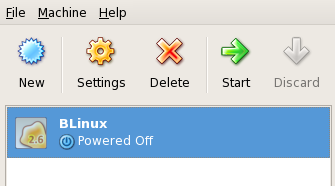 VirtualBox is a free virtual machine developed by Sun Microsystems.

This is particularly useful when building kernels and checking that they boot correctly.

It is also useful if you wish to switch between operating systems, or have (as happens in so many cases), applications which will only run under Microsoft.

I personally have installed VirtualBox under Mandriva 2009, from the add/remove programs part of the computer configuration.

The first time I ran it, it appeared to run perfectly, however, I believed I could not see all of the hardware, so I ran it as root. From then on, it would only run as root, and I received the following error message when I tried to run 'VirtualBox' from the command line as a mortal user:

WARNING: The vboxdrv kernel module is not loaded. Either there is no module available for the current kernel (2.6.27.7-desktop586-1mnb) or it failed to load. Please recompile the kernel module and install it by sudo /etc/rc.d/init.d/virtualbox start.

You will not be able to start VMs until this problem is fixed. VirtualBox: SUPR3HardenedMain: effective uid is not root (euid=500 egid=500 uid=500 gid=500)

Now my Mandriva 2009 does not have 'sudo' installed - this appears to be a dependency of VirtualBox that was overlooked during installation. I installed 'sudo' through the system's Administration control panel. I also had to edit /etc/sudoers to include myself:

This still isn't right - I can now sudo launch VirtualBox from the command line, but it doesn't work from the main menu. There are posts on the internet telling you to make sure that your user is in the correct group to get it to run as a mortal, however, I created the group, and changed the permissions on the application, but failed to get the program to work. I am therefore going onwards as root.

Before I started, I changed the directories used to store the virtual disks - this was as easy as clicking 'File Preferences'

I am making a small Linux distribution, so I have selected:
This is continued in a different blog entry!

Failed to register hard disk - a hard disk with the same UUID or properties is already registered: Make sure you delete / unregister the disk using the Virtual Disk Manager (it's on the file menu) rather than removing the actual file.

Virtualbox can be downloaded from: http://www.virtualbox.org/