There is a program running on your DG834 called dnsmasq, which is used to forward DNS requests to the appropriate servers. The program can optionally use one or more local hosts files, so if you are hosting a webserver at home, for example, you can add it to the hosts file, and any LAN requests will return the LAN ip address, rather than the internet one.

By default, at least on the DG834Gv5, the option to add your own entries is not enabled.

With a web browser, connect to http://your-modem/setup.cgi?todo=debug
Telnet to your modem: telnet

To check it works, restart the DNS Masquerade program:

Now, there is a problem making this permanent as the root filesystem is 100% full, but what you would need to do is:

Settings required to get internet working on the go with the Google Nexus One, which is running android version 2.1 are shown below. 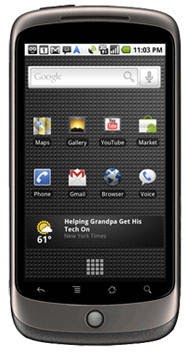 My new Google Nexus One phone is running Android 2.1, and makes use of the Google beta voice recognition.

Summary: To date, I give it a 6/10. It didn't work too well for me, but shows significant promise.

For this facility, the actual processing is performed online - your phone captures a sentence, uploads it to a voice recognition service, and it is processed, and the results sent back (very quickly).

I should also point out that voice recognition that is performed to dial people from your address book, does not require an online connection, and is handled within the phone itself, for example, I can say 'Call Steve Clarke', and it works quite reliably.

For me, the online software, which is used for text and email dictation, and GPS destination searching, is a bit of a struggle:

I said: "This is the google voice recognition software. So far so good. I have a very mild lancashire accent and this software seems to struggle with long words and complicated sentences."

It typed: "This is the google voice recognition software. So far so good. I have a very mild length transaction. Famous software seems to struggle with long words uncomplicated sentences."

It seems to me that the software struggles with spoken contractions of words, for example, I said "andcomplicated". I also suspect that it struggles with words that aren't in the US based dictionary, for example, 'Lancashire', which is pronounce by most people either lank-i-shuh, or lank-uh-shuh.

Nice try though, and I look forward to upgrades on the processing server which will recognise me !

All in all, it is much better than the Windows Vista recognition - see my blog on 'Windows Vista does not like northeners'.

From the looks of it, things are getting better. Take a look at a 2008 article on the Telegraph website.
No comments:

Just ordered a Google Nexus One, and have upgraded my O2 contract to include Unlimited data access.

Unlimited is a term that really should not be used, as there are limits: You have a 1G/month download limit, and there are other limitations in the Ts&Cs, such as not being allowed to use VOIP.

Once I changed over, O2 sent me some new phone settings, which I applied to my E90. By default, the browser access point was "O2 Postpay WAP". I also tried the "O2 Mobile Web" settings - see below for details:

With the "O2 Postpay WAP" access point, I initially had a 3.5G connection, but it soon dropped back to 3G:

With the "O2 Mobile Web" access point, I have a 3.5G connection:

Back to the original settings "O2 Postpay WAP":

And finally, back to "O2 Mobile Web"

Now, it looks like there is a choice between slow or un-reliable:

The different capabilities of the protocols / connections are as follows:

Performing the same tests with a Google Nexus One

The following tests are going to be performed ...

Before, and after the Google Nexus One tests were performed, the E90 was used to benchmark the network capabilities at the time of the test.