Paragliding - What Not to do ! 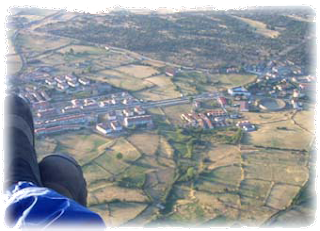 I’ve recently been on holiday to Spain, for a week’s paragliding.

My first day was excellent, with a nice 3 hours flight, getting to a height of 2.5km above ground level. A great triangular flight, covering 35km, and getting back to the top of the mountain.

The next day, however, things weren’t quite so great. We used a take-off site I had never visited before - I am always apprehesive on take-off, and a new site only increases the stress. I set up on the hill, at which time there was nill wind. The logical thing to do was to wait for a thermal to come through.

Well, the thermal came through, and I picked up my paraglider - it was slightly off to one side, so I corrected with the brake lines and turned round to face the direction I’d be running. The paraglider then dipped off slightly to the right, so I adjusted with the brake as I began to run. At this point, I’m not exactly sure what happened - either I stumbled, or I was picked up and dumped by the back end of the thermal - it is likely that as this happened, I put on a lot of left brake, as I flew to the left across take-off, crashing left-foot first into the mountain.

I rolled over onto my back, and my left foot wasn’t quite pointing the direction it should have been. Now I was surprised that this did not hurt as much as I thought it would (I had actually broken my ankle and fibula, and it seemed to hurt less than when I broke my toe a few years ago).

After about 20 minutes, the ambulance, police and local doctor appeared on the side of the hill. Fortunately, I’ve been learning Spanish at my local college, and could manage some rudimentary communication. The doctor gave me the once over, worried that I had damaged my spine - I explained that the crash was relatively slow speed, and that my paraglider harness had protected my back.

It took 6 people to carry me down the 20 yards to the ambulance. After another check by the doctor, I was bundled off to the hospital (1 hour away in Ávila).

Now I had it in the back of my mind that there was a maximum amount of morphine you could take, and I thought that I’d need everything that I could have to get me through the night. As the pain was not excruciating, I refused painkillers. The time I really wished I had had some morphine was when they took my tight boot off (this hurt quite a bit) - anyway, at least my foot was pointing in the right direction afterwards.

The surgeon explained that I’d need an operation to fix the bones in the ankle. We had a conversation of risks of travelling, waiting and DVT, and I chose to have the operation in Spain, rather than wait until I got home. 5 hours later, I was in surgery.

They gave me an epidural, which was an interesting experience, as you were completely with it, and could hear everything that was going on (they didn’t let you watch). The incision felt strange - it felt like someone drawing on your foot with a biro - that was the only sensation I had. I heard some drilling, and the staple gun (used to close the wound), and the 20 minute operation was over, and I went on to spend a couple of hours under observation, until the anasthetic wore off.

I then spent a couple of days on the ward - and by this, I mean in room with one other patient. Spain is very different from the UK in the way hospitals work - firstly, they seem to work ! - and secondly, it is normal for the family to look after the patient in the hospital, washing, feeding, fetching water etc… There is no ‘visiting time’ as such, in fact, it is the opposite “Families must vacate for 1 hour a day, when the doctors are doing their rounds”. It is not uncommon for a family to stay with the patient throughout the night.

My room-mate had a head injury, after a light aircraft accident, and was suffering from double vision. His wife never left the room (unless the doctors came round, or I needed a pee).

I guess one of the worst things was the heparin injections that were given in my stomach fat (thank heavens I have quite a bit of that!). After 2 nights, I was discharged, went back to Steve and Puri’s, and spent the rest of the week chilling. The local nurse cleaned and re-dressed the operation wound, and taught me how to do my own injections. 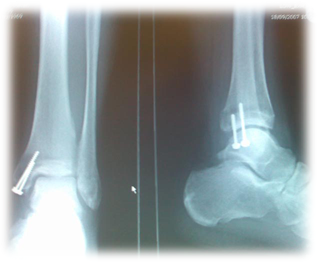 My insurance company made arrangements to fly me back business class, and then taxi me to my door. The following Monday, I went to the local hospital, where the surgeon was pissed off that I had the audacity to have my operation done in Spain. I had the half-cast replaced with a full-cast, and ambled home by taxi for 5 weeks of lying with my foot elevated.

After three weeks, the cast had become so loose, the leg was supporting the cast, rather than the cast supporting the leg. I returned to the hospital, where it was replaced. I’ve just over a week to go before the cast comes off, and it is getting loose again …..

It’s now a week or so later, and I’ve got rid of the cast. My left calf muscle is almost non-existant (wasted to less than half its original size in the 6 weeks of rest).

I’ve got some excercises to do, and a visit to the phisiotherapist, but within a couple of weeks, I should be able to get rid of the crutches, walk and drive again.

For now, I’ve to keep the weight off it and gently excercise it, but it will be a while before I am flying again.