I've captured a set of pictures to make a 360 degree tour 'a la streetview' using open source programs.  The resulting tour does not need any flash apps, and  works on PCs, Android and IOS, and is server-served, fast and easy to configure.

It's not practical to take 360 degree photos without the use of a tripod and a mounting bracket because you get severe parallax problems, and it is almost impossible to stitch the photos back together.  I use a sturdy tripod and a panoramic head - this is a bracket which allows the camera to rotate in all dimensions about the lens, rather than the mounting point on the body, and can be bought for as little as £25.

As far as the lens of the camera goes, I started with the standard lens which came with my Canon EOS1000D, but found I needed to take over 100 photos to get a full panorama, and in some cases (particularly indoors) it was not possible to stitch the photos back together as some pictures ended up being of bare bits of wall with no distinguishing features (more on that later).  So, if you want to start with the lens that came with your camera (e.g. an 18mm-50mm zoom), start outside with at least 5m between you and the nearest object to have a chance.

I tried using a fisheye lens adaptor for the existing lens (i.e. a second set of lenses that plugs onto the front of your existing lens), but had a number of problems, firstly, the assembly was marginally too long for the panoramic head, and then, once I had managed to take the photos, the lens told the software that the photos were taken with an 18mm lens, but couldn't tell the software about the adaptor, plus I had no model of the adaptor so couldn't tell the software the right parameters (there is a calibration tool you can try), but most frustratingly, if I knocked the zoom whilst taking photos, I destroyed the set. 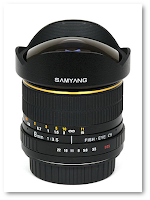 I ended up buying a Samyang 8mm fisheye lens for the camera, which in theory reduces the number pf pictures you need to take from 100 to just 5 - this has a processing advantage on the PC when stitching, as a panorama can be made in 30 minutes rather than 48 hours!  This particular lens is not expensive as far as lenses go, and the same lens is badged by different companies and supplied at wildly different prices, so check-out "Samyang 8mm f/3.5 Fisheye" and "Rokinon FE8M-C 8mm F3.5 Fisheye".

The lens comes with a large sun-shield, however I had to unclip this because it fouled with the panoramic head bracket.

Setting Up the Panoramic Head 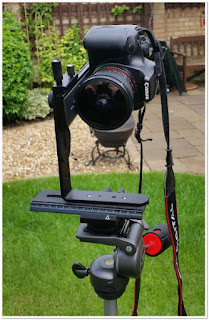 It takes quite a while to set up the camera and lens on the tripod with the panoramic head, and this is a very important step as it is essential to remove any parallax.

Fit the panoramic head to the tripod, and for the left-right direction, setting up is quite easy to do - with the tripod set up nice and level, look at the camera lens and adjust it so that it is directly over the centre of the tripod - use a plumbline if necessary.

Once the lens is directly above the centre of the tripod, you can now adjust the depth - i.e. move the lens back and forth until the parallax is removed.  Set the tripod up near a vertical object, e.g. so the camera lens is inches away from a door frame, in a position where you can see objects in the distance.  Tilt the camera (using the panoramic head) so that a distance object can be seen overlapping the door frame - it is important that this is on the horizontal centre line of the camera.

Now, pivot the camera from left to right, and adjust the front-back position of the camera until the distant object does not move with respect to the door frame at the left and right extremes.

At this point, your camera is set up in a no-parallax position.  If you were lucky enough to be able to use the fixed screwholes in the bracket, you can read-off the calibration numbers on the panoramic head for next time.  Note that you may be able to see the end of the bracket through the lens - don't worry about this, it can be masked out later.

The following picture gives an example of a correct parallax setup, with a door frame in the foreground, and an orange ball in the distance - you can see that the ball does not move with respect to the door frame when the camera pans left to right. 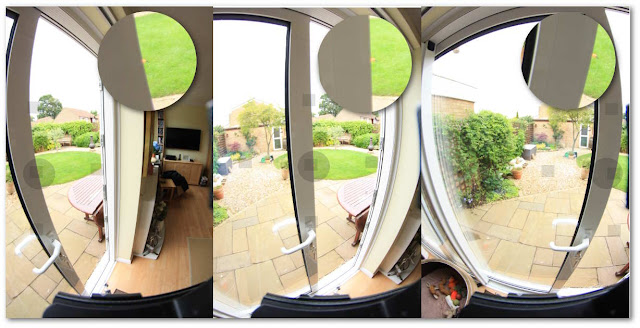 Setting up the Camera

To get the best results, you need to used a fixed focus - this means that the same point in adjacent images is at the same focus, and the software has an easier ride when stitching them back together.  If you are using the same fisheye lens as I was, it's not a problem as the lens is manually focussed, but if you are using the stock lens, or a more expensive one, you need to turn off the auto-focus.

The Hyperfocal Distance is the optimum distance at which to focus when combined with an aperture setting (F-stop) that gives the best focus over the best distances, for example for the stock-lens, if you want everything from 1m to infinity to be in acceptable focus, you set the F-Stop to F16, and focus on something 1.5m away - there are apps for this, just such for "Hyperfocal".

You can pretty much use F8 for everything, and around F8 is where you will probably get the sharpest images.
Camera Mode and White Balance
Take your pictures in high-quality JPEG + RAW.

If possible, use exposure bracketting - set your exposure as low as it possible and take brackets 2EV in RAW format (when taking shots outdoor in sunny day use high F).

You can use Aperture Priority Mode, and simply set the F-Stop setting, or use the Manual Mode, but in the latter case, you will need to take into consideration the potentially wide range of brightness / darkness, particularly if shooting outdoors.

This bit is TBC, and needs some pictures and a better explination.

Choose the right day and time for your photograph, considering shadows, the sun, light levels, dynamic range (light to dark) in the image and your camera's capabilities.

Care should be taken when placing the tripod:

I find it best to put the camera on a 2 second delay, that way the camera is stable when the photo is taken, plus you have time to get your shadow out of the shot.

Adjust the camera downwards so that it can just 'see' the tripod and the panoramic head.  Now, take photos, moving round in a clock-wise direction, making sure that some features in the previous photo are present in the next (at least a 20% overlap is ideal) - with the Samyang 8mm lens, this means you should only need to take 4 photos, however I usually space it out with 6 photos for outdoors, or more if I am close to a wall or indoors.

For each photo, make sure the camera is stable, and watch for moving objects - e.g. people walking, or close-up trees waving in the wind.  If there are any, get them into the centre of an image, not in any overlap region, and make sure they only appear in one photo!

Once you've panned round, move the camera up - for the Samyang 8mm lens, this literally means straight up!  If you've got a standard lens, you will need to take photos in several bands until you hit the top!

If the day is particularly bright, and you don't have a great dynamic range for your camera, you can consider: taking images in RAW format, and taking a second set of images with a smaller aperture or faster shutter speed.

Note that you will need to be quick if there is a lot of movement - e.g. clouds moving, and this is where using a standard lens is very difficult.

Once you've taken your photo set, take the camera off the tripod, and take a photo straight down - this may be useful in 'filling the hole' later!

Mark the End of a Panorama

Once i've taken a complete set of pictures, I take a photograph of my hand to delimit one set from the next - this is particularly useful if you adjust the settings or position very slightly between sets.